On October 29th 2010 at 4:03 AM (JST), precisely 7 years ago, it was announced that Takeshi Shudo had passed away. He was the screenwriter of franchises such as GoShogun, Minky Momo, and some obscure little thing called Pokémon among others. A remembrance event was held at the Shin Bungeiza movie theater in Ikebukuro on June 25th 2011. This is a translation of a fan’s write-up of this event. She is a self-described older lady that has been an anime fan since the original airing of Space Warrior Baldios, for which Takeshi Shudo also did screenwriting. She runs a fan site specifically dedicated to Baldios, and goes by the alias Pajyata.

Unless noted otherwise, any outgoing links in this article lead to untranslated Japanese resources. When full names are not referenced, the original article uses last names. In this translation full names are written in English order, last names referenced by the event guests are replaced with the corresponding first name, and last names referenced by write-up author Pajyata are left as last names. I have added extra context notes not contained in the original article which can be found at the end.

This was the remembrance event for Takeshi Shudo, who passed away in October 2010.
“In Memory of Screenwriter Takeshi Shudo”
I arrived at Shin Bungeiza at the event’s starting time, June 25th 2011 (Saturday) 10:30PM.

Originally this event was scheduled to take place on March 2011, but due to the Tohoku earthquake and tsunami, the event got postponed.

I didn’t take any notes so all of this is written from memory.
There are probably many discrepancies with what was actually said at the panel.
Please think of this as an experience viewed through Pajyata-tinted lenses.

Up to the last minute I didn’t know if I’d make it in time to get an entrance ticket that day.
A few days ago the advance tickets were sold out.
I was pretty anxious but I was able to purchase ticket 143.

Upon entering, I also received a specially compiled remembrance anthology (Not for sale. 31 pages. In Memory of Takeshi Shudo All Night Executive Committee Publication). 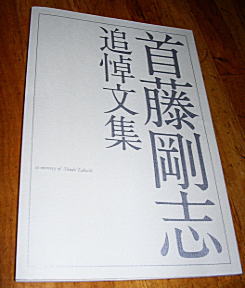 The GoShogun previews screening made me feel super nostalgic.

The previews got progressively sillier but as I kept watching, by the last preview I realized that it had concluded seriously (via Sabarath’s narration).

Next was the main event: the panel.
It started with each panelist introducing themselves and describing their relationship with Shudo.

Afterwards, at first one by one each person recounted their individual experiences with Shudo but different panelists would chime in from time to time. It eventually became a discussion among the guests. Hence, as best as I can remember I have listed their respective remarks in bullet point form.

At the end, Hiroshi Watanabe got up from the attendee seats and was called up to the to the stage (“I’ve been invited to the hotel conference too!” He got on the stage with a smile). A fierce rock-paper-scissors tournament occurred for an EP record of the Minky Momo theme song and a CD, both signed by Koyama. It ended with these presents being given to three people. Then we had an intermission before the screening of the four films.

In the passageways there were original manuscripts and related signed articles on display. 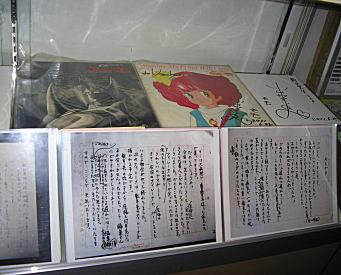 There were also posters on which the guests signed and left a message.
Attendees were also allowed to write a message if they wanted.

So I also left a message.
(After the event I heard this poster was sent to his family)

There was also this!!

Oh ☆! This must be from the author of the Unaired Baldios Manga, Ryuuhi Misaki. [15]

Baldios stories haven’t really (or rather, have barely) come out but Shudo’s accomplishments in Baldios were great.

And like this, I’ve now reached the second time I’ve written about a memorial event since Haneda’s passing in 2007. [16] I shuddered at the thought of how many more times I might do something like this.

These last couple of years, I have heard of the passing of many of these kinds of people. The people who created the entertainment that would excite me back in the day. Those people whom I adored.

When Shiozawa [17] and Haneda passed away, the shock was so great that I screamed, “why!!” At that time the feeling of anger was stronger (perhaps because I was younger then). As things proceed like this, rather than some kind of resignation, I feel beaten down by the reality of the inevitable passing of these people. It hurts. Shudo is the god that created my beloved Baldios. Even if he were to appear frail, I arbitrarily thought that through some special means somehow or other he’d always be healthy!

The mood at the venue was really great. It was warm and heartrending, and the stories from all the guests about Shudo were wonderful. There were also Remy cosplayers at the venue ☆ (two of them!! One in the red fighter suit and another in The Time Étranger jumpsuit).
For all these people to gather and talk about Shudo, the absence of the man himself imparted a strange feeling. Although those thoughts were on my mind, I still laughed at the panel, had dumb conversations with the friends I went with, and hung out with them sleepily until morning. (My hips hurt -> all-nighters are rough on an old body)

Mostly the same group of people attended the wake. It’s not like I am that familiar with his work outside of Baldios and I don’t consider myself to be a super huge fan, but I still wanted to go no matter what.

After burning the incense, we all went to the trouble to get together so we proceeded to drink merrily, eat, and chat. Depending on how you look at it, doing these things in mourning dress may be considered extremely imprudent behavior. However, once you become an adult, gathering in large numbers becomes pretty difficult. “Thank you for giving us this time for fun Shudo!” I thought, as I drank at a pace faster than usual.

When a famous person passes away, typically it’s not someone with whom we feel close. It’s not like we’d particularly feel sad, right?
We feel shock and sadness upon hearing of someone’s passing because we liked that particular person. In my own way, I liked Shudo (he was the kind of person who in some way or another conveyed himself through his writing). So I do feel some sadness due to this but more than that it’s because I have consumed so much of his work.
That’s why in the end,
“Thank you”
“Thank you for writing Baldios”
All I can say is this.

But… as far as the “memorial” is concerned please forgive me.

Source: http://baldios.iinaa.net/see-you-syudou.html
Besides her fan site, Pajyata can be found on Twitter.