This review of Royal Space Force: The Wings of Honnêamise was published on July 19, 2015 for “Personal Film Favorites”, a recurring newspaper column in the Yamagata Shimbun. The author, Kiyoaki Ōkubo is an associate professor in the humanities department at Yamagata University, where he focuses on Film Studies and Studies of Culture and Representation. A translation follows after the picture of the newspaper column. 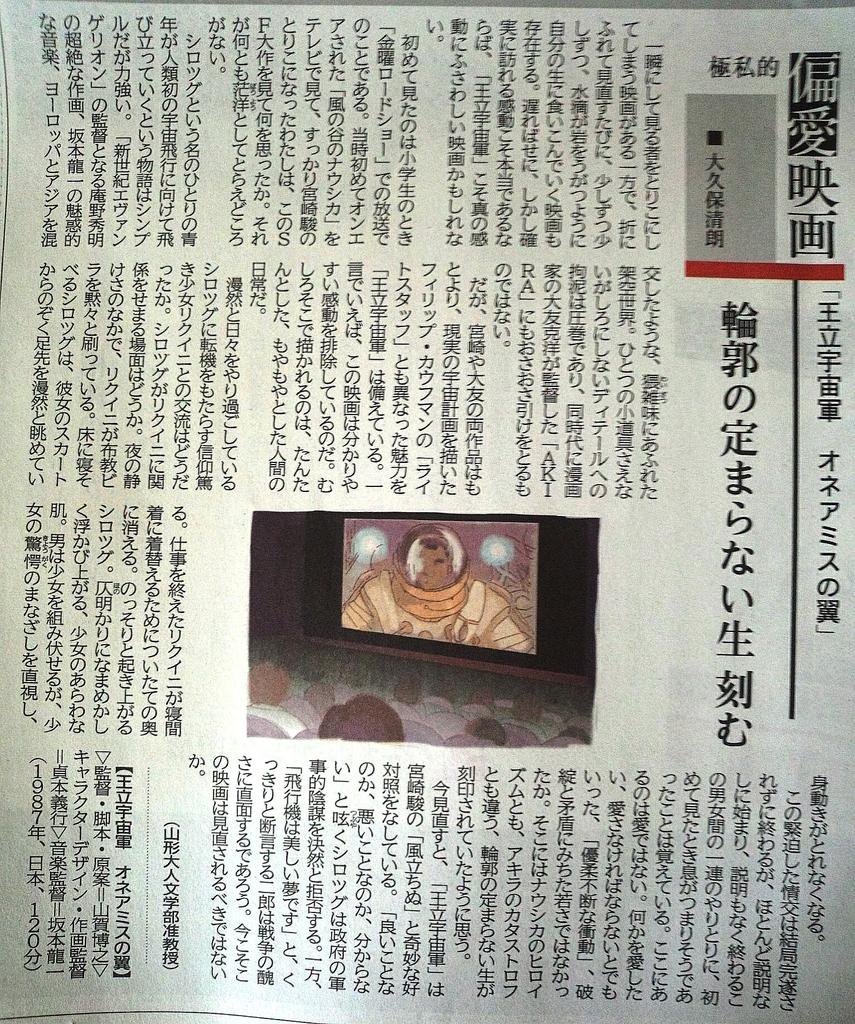 Some movies captivate its viewers in a swift, fleeting moment. Other movies slowly creep up onto you and eventually pierce your core, like drops of water digging through rock. Every rewatch digs further and further within. If there is truly a film where one can experience sincere emotion through such slow pacing, Royal Space Force may be that film.

The first time I saw RSF, I was an elementary schooler watching Friday Roadshow [1]. Back then, Nausicaä of the Valley of the Wind aired on TV for the first time, and immediately I became a Hayao Miyazaki convert. Reflecting back on it now, I don’t have a clue what the young Miyazaki fan I was back then made of this sci-fi masterpiece.

The story told is of a young Shirotsugh who aims to be humanity’s first astronaut. The premise is simple, but the story is actually quite impactful. Animation from Neon Evangelion Genesis director Hideaki Anno and alluring music by Ryuichi Sakamoto come together to create a Euro-Asian blend: a fictional world brimming with uncouth vulgarity. Great attention to detail is paid to even the most minor of tools and objects. So much so that this film stands its ground against original manga author and director Katsuhiro Otomo’s Akira, created in the same era.

That being said, RSF is distinctly different from the aforementioned films of Miyazaki and Otomo, and even from Philip Kaufman’s The Right Stuff. To put it concisely, RSF offers no moments of straightforward poignancy to its audience. In fact, much of what is shown to the audience is the mundane and gloomy everyday of humanity.

Consider the interactions between Shirotsugh, who dawdles away his days aimlessly, and the devout Riqunni, who serves as the catalyst for Shirotsugh’s transformation throughout the movie. Recall the scene where he sexually assaults Riqunni. In the silent night, Riqunni makes copies of flyers to preach her religion. As she does this, Shirotsugh lies on his side and mindlessly stares at her feet up to her skirt. Once Riqunni finishes her work, she retreats behind a wooden screen to change into pajamas. Shirotsugh slowly rises up from the floor. The dim candlelight wavers voluptuously. A girl’s bare flesh is exposed. A man pins the girl down to the floor, and confronts the terrified gaze of the girl. He freezes and is unable to move any further.

In the end, this sexual tension stops short of where it is headed. It began with hardly an inkling of what was to come, nor any elaboration as to how this altercation ended between the pair. I remember how suffocating it felt to watch this scene for the first time. This was not love. This was indecisive impulse fueled by a desire, a need to love something. This was youth mired in collapse and contradiction. Unlike the heroism of Nausicaä or even the catastrophe of Akira, I feel that RSF leaves its mark with a portrayal of unconstrained life.

Upon rewatching Royal Space Force today, it stands in stark contrast to Hayao Miyazaki’s The Wind Rises. Shirotsugh mutters “I don’t know if it’s a good or a bad thing…” and goes on to firmly reject the government’s repurposing of the rocket launch for their military conspiracy. On the other hand, you have Jiro who confronts the war in front of him and declares that “airplanes are beautiful dreams.” I think now more than ever, we ought to revisit RSF.

Curiously, Ōkubo does not comment on Hiroyuki Yamaga’s role as director, although he does mention several other industry figures. Admittedly, they are more likely to be recognized by the general public considering their respective achievements compared to those of Yamaga.

You can find Kiyoaki Ōkubo on his academic homepage and on Twitter.

The photo of the newspaper column was uploaded by Twitter user @onmitsuyuusya. The tweet containing the photo can be found here.

Coincidentally, Royal Space Force superfan Carl Horn and the Colony Drop folks appeared on the 181th episode of ANNCast to talk about Royal Space Force and The Wind Rises, although they do not attempt to connect the two films. The latter premiered in the US shortly after the podcast episode went up. This episode is a must-listen for anyone interested in the context that surrounds either film.