No, this is not about the Yoshinori Kanada 85-minute long spectacle and commercial failure. It is instead about the first entry, Dallos, in the once flourishing format, original animated video, often abbreviated back then as OAV. In this Animage interview (from which issue I don’t know, but presumably shortly after July of 1984), Shigeru Watanabe, planner for Dallos, talks briefly about it and the emerging home video rental market. An essay—about the potential of the OAV format from Machikado no Märchen producer Tomoyuki Miyata—follows the interview with Watanabe, but I have not translated it here.

For what it’s worth, OAV had fallen out of fashion as a term by the time I got into anime, so I normally use OVA. However, since this piece contextualizes the birth of the format, I felt it was more appropriate for the title to use the widely used abbreviation in its heyday. By the way, the Japanese wikipedia page notes that of the anime magazines from back then, Newtype was the only one to use OVA, while all the others used OAV. Nonetheless, the source text uses neither abbreviation, and instead uses the term “original video anime.” Perhaps it was too early in the history of the format for such an abbreviation to emerge, but make of that what you will.

Special thanks to @mad_yn for the source images of the interview, which can be found on Twitter here.

Outlook on Original Video Anime
“From now on, it’ll be an era of sales and rental.”
Bandai Co., Ltd.
Frontier Division
Shigeru Watanabe

Following TV and film comes the third format of anime: original video anime. Starting with Dallos, Machikado no Märchen, and Birth, many more projects are currently underway. However, to both the viewers and the creators, the format feels very much as though it’s still in an experimental stage. Here we’ve gathered the opinions of the planner of Dallos, Bandai’s Mr. Watanabe, and the producer of Machikado, Kitty’s Mr. Miyada.

Leading up to the production of Dallos

Animage: Did you intend from the beginning to release the first original video anime out into the world?

Watanabe: In truth, not really. It was much more the case that we didn’t really know what we were doing, but that’s how it ended up.

Animage: Was Dallos planned from the beginning as a home video release? 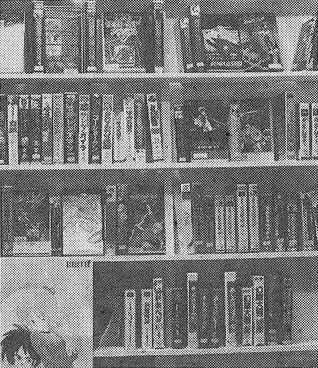 A town’s rental shop is filled with anime tapes.

Watanabe: It was originally planned as a TV project. Around November 1982, we had a request asking us to start thinking about a project to replace Minky Momo in the same time slot. At that time, several companies pitched their ideas to us. One of those pitches was Studio Pierrot’s Dallos. Up until that point, I myself had not seen any of Urusei Yatsura, but some time after I saw this one episode: “Terror! The Deserted Fossil Grounds Mystery.” (laughs) After seeing so much power displayed on the screen, I figured if they could make that, then they would be able to do the job.

Animage: How did it end up going to home video?

Watanabe: Considering the sponsors, it was too mature for the Popy Division (primarily young children’s toys sales), and the robots were too lame for the Hobby Division (primarily plastic model sales). Given these circumstances, the pitch was rejected as a TV project. However, giving up there would have been regrettable considering how passionate everyone involved was and that Bandai’s home video division had just been established. So we figured, why not make it an original home video project.

Animage: Looking at it now, how has the reception been?

Watanabe: II came out around December, but we didn’t see much movement in the sales. Then, when the new year—the season of monetary gifts—rolled around, it started to sell. (I came out in January, III Act 1 in April, and III Act 2 in July) Currently, each episode has averaged about 10,000 units in sales.

Animage: A success then, somewhat.

Watanabe: Yes. We were fortunate in that this was the leading experiment in the original video anime format, so it drew a lot of attention. People were excited for it as a sort of event. Of course, Mr. Toriumi, Mr. Oshii, and the rest of the Pierrot staff’s meticulous effort was a big factor as well.

Animage: Following the success of Dallos, putting aside the announcement of a new Mami title, it doesn’t appear that there are any upcoming purely original projects…

Watanabe: We intend to do more in the future, but we’re considering a different strategy from that of Dallos for next time.

Animage: And by different strategy you mean?

Watanabe: It wouldn’t just be about sales, but also the whole system. We can distribute home video releases through an established rental system. Bandai’s rental system begins starting in October. Then next year, I expect we’ll start the production of original video anime in earnest.

Animage: Currently the legal rental systems in place are those from the Japan Video Software Association and Warner.

Watanabe: Yes. Actually, Bandai’s keiretsu group has a video shop company known as Network. They handle home video sales and also work on a legal rental system. First, as an experiment, we will provide tapes for rental purposes to the Network franchise shops (there are about 20 of them); we intend to expand this. By the way, the current rentals out there of Bandai’s home video products are all illegal. Within the year, we’d like to get rid of all those illegal rentals.

Animage: So taking rentals out from the shadows and normalizing them, then.

Watanabe: In the first place, wasn’t the function of home video to expand the way that TV can be enjoyed at home? Also, currently home video is far too expensive; of course illegal rentals ended up taking off. I think we have to do something about this situation. With regards to original video anime, by its nature it has the potential for content that cannot be shown in film or TV; that gives it a meaningful existence. Because of this, we should offer another way that allows more people to watch it freely. Seeing as the tapes are currently sold at such high prices, it’s no wonder the situation is what it is.

Animage: Indeed, in the case of original video anime, the audience won’t know what kind of content it contains. You would expect few people would be willing to shell out so much money for such a product.

Bandai’s Home Video Anime
This lineup captures the mentality of hardcore fans so much that they involuntarily reach out and won’t let go.

Watanabe: Because Dallos is the first such product of its kind, everyone gave us plenty of support, but we cannot rely on this here on out. First, we’ll let customers watch at a lower price. Then, people who really like what they see can purchase it if they wish. From now on, we should proceed with “sales and rental.”

Animage: That applies not just to original video anime, but all home video, yes?

Watanabe: I think so. Maybe home video just worked in an era where it belonged to a subset of hardcore fans, but as long as we’ve popularized and brought it to the masses, I think we have to make it easily accessible to anyone who wants to enjoy it. I think there are many people who are not collectors and are satisfied after just one viewing.

Animage: And at the same time, those collectors will still be around.

Watanabe: In consideration to collectors, we also have to think about videodisc. Considering the image quality, durability, and price of videodisc, the format is superior for collectors. Alongside the progression of the rental system, I’d like to put out videodiscs for the hardcore fans.

Animage: So here on out, the world of home video will progress with the normalization of the rental system and an approach towards discs.

Watanabe: Later, after the price reduction of home video, it’s still necessary to put in some more effort in reducing the price of tapes and discs further. With regards to original video anime, we should make titles that can only be done in home video, not films or TV. There’s no use in doing exactly what we’d do in TV. Even with Dallos, it was originally more of a non-character crowd drama. In the middle of production, I kind of felt like it became a bit more TV-like. Next year onwards, I’d like to take our experience in producing the original property Dallos and put it to use in making something fitting for the home video format.

Source: An issue of Animage after July 1984?

The source images for this interview can be found on Twitter here.