The Establishment of Madhouse and Involvement with Tokyo Movie Projects

Kinejun: By the time Kunimatsu aired, Mushi Pro was on its last legs.

Sugino: Yes. Around that time more co-productions were coming in from America. I didn’t do this one but Barbapapa was one such co-production (editor’s note: this is likely the TV series co-production with Frank Fehmers Productions from the Netherlands. It aired in Japan in 1977). There were two or three such productions. The animation work was outsourced to Mushi Pro.
Snowman (editor’s note: this was a co-production with Rankin/Bass Productions from America titled Frosty the Snowman) was another one. That was the first time I had my desk lined up next to Osamu Dezaki as I drew keyframes. I was also next to Sadao Miyamoto. This was the final feature length work from Mushi Pro, tackled with the combined efforts of the entire company.

Kinejun: Was it ever released?

Sugino: Yes it was, although I don’t think it was screened in Japan. Barbapapa did get aired here though. Besides those, there was also The Mad, Mad, Mad Comedians (editor’s note: this was a co-production with Bruce Stark Productions from America), and some others.

Kinejun: And you did the key animation for Snowman.

Kinejun: How about The Mad, Mad, Mad Comedians?

Sugino: Yes, that as well. All I did was key animation around that time.

Kinejun: Around when did you leave Mushi Pro?

Sugino: After we wrapped up Kunimatsu. We left to start Madhouse.

Kinejun: Was Maruyama the Madhouse representative and president?

Sugino: The representative was production assistant Yasuo Ōda, although now the Madhouse president is Masao Maruyama.

Kinejun: What was your official position back then?

Sugino: I didn’t have any in particular. I was tentatively something like an executive.

Kinejun: Was Madhouse a limited company?[1]

Sugino: Yes. Osamu Dezaki, Masao Maruyama, Yasuo Ōda, myself, and one more person… It was created by about five people.

Kinejun: Was there a particular reason for splitting off from Mushi Pro?

Sugino: I think it was simply because Mushi Pro folded.

Kinejun: It still continued on a little bit after Kunimatsu though.

Kinejun: So it was understood that the end was near.

Sugino: By the time Little Wansa was being produced, we had already established Madhouse. When Kunimatsu ended, and a little bit of work had been done on Tove Jansson’s Moomin, the staff had split off into two directions by that point—to Madhouse and Sunrise. That’s what happens with such a big rift.

Kinejun: So the fate of the company was apparent from the lack of work coming in, and that’s how Madhouse was formed. I take it that you didn’t work on Moomin then?

Kinejun: Around when did you actually start getting involved with Tokyo Movie projects?

Sugino: 1972. Since The Gutsy Frog? I did a lot of work on that. I also got scolded quite a lot on that project. That was my first experience working with Tokyo Movie.

Sugino: Yes. Initially there were plans for an adaptation of Tetsuya Chiba’s Yuki’s Sun, but that project got axed. So instead, I ended up working on The Gutsy Frog.

Kinejun: So the first title Madhouse you worked on was The Gutsy Frog.

Kinejun: How about the folks at A Production? Were you affected much by them?

Sugino: Oh quite a lot. They were completely different from Mushi Pro. To put it concisely, they were much more movie-focused.

Sugino: The way they layered shots was completely different. At Mushi Pro it was more like panel layouts for manga, the composition of which would often change. Consider a shot of arms folding. Pause, pause, then movement. Then the next shot is of arms lowering. Mushi Pro had a lot of scenes like this. But I was told that this is very strange. The late Nagahama[2] would be really fussy about details like this and bother me about them. He’d also talk about the duration of voiced lines and how to direct the acting. His roots are in puppet theater. During the pre-editing film check he’d voice the female lines by adjusting his tone of voice. I recall being quite awestruck at the lengths he’d go to for even a manga movie production.

Kinejun: Was Aim for the Ace! a Madhouse proposal?

Sugino: No, it wasn’t. For the production of Ace, I was on loan to Tokyo Movie from Madhouse.

Kinejun: Was animation work done at A Production?

Kinejun: So you weren’t necessarily always working at the Madhouse studio.

Sugino: Correct. During Aim for the Ace!, Yoshio Kabashima was on loan from A Pro. Oh, and also Takeo Kitahara, a Tokyo Movie employee at the time.

Kinejun: An employee there since Big X.[3]

Sugino: Two of us were on loan and together us three worked together up to and during Ace. But Kaba (Yoshio Kabashima) didn’t work much on Ace.

Kinejun: So you three were animation directors for Kurobē and Aim for the Ace!, but did you do the animation work with your desks lined up together at the Tokyo Movie studio?

Sugino: Actually, Jungle Kurobē was originally a project proposed by Hayao Miyazaki, who was at A Pro back then. He drew some really nice pictures for the proposal. But there was already an established direction for a Q-Taro adaptation. Even though Kaba was involved with New Little Ghost Q-Taro, Dezaki wanted to change the direction of the show. However, it’s originally Fujiko Fujio’s work,[4] so he couldn’t make sweeping changes. Instead he tried to make the show a bit sharper through trial and error. As a result, there were a few changes compared to the first Q-Taro adaptation. It was a bit harsher in nature. Apparently there’s issues with it now so there are few chances to re-watch it.

Kinejun: It was much speedier, which made it fun to watch.

Sugino: But it was quite inconsistent.

Kinejun: Did you also draw the character model sheets for Kurobē?

Sugino: I drew the guest characters in the second half. Kaba drew the main cast.

Kinejun: At the beginning did you have the initial character drafts from Miyazaki?

Sugino: Oh yes. Perhaps they’re being stored away safely somewhere. Even during that era, he was a divine figure at Tokyo Movie.

Kinejun: So these proposal drafts were brought to Fujiko’s office?

Sugino: And approved, I think.

Kinejun: All three of your names show up in the credits for Kurobē, but how was the work divvied up? Is it different from that of an assistant animation director? 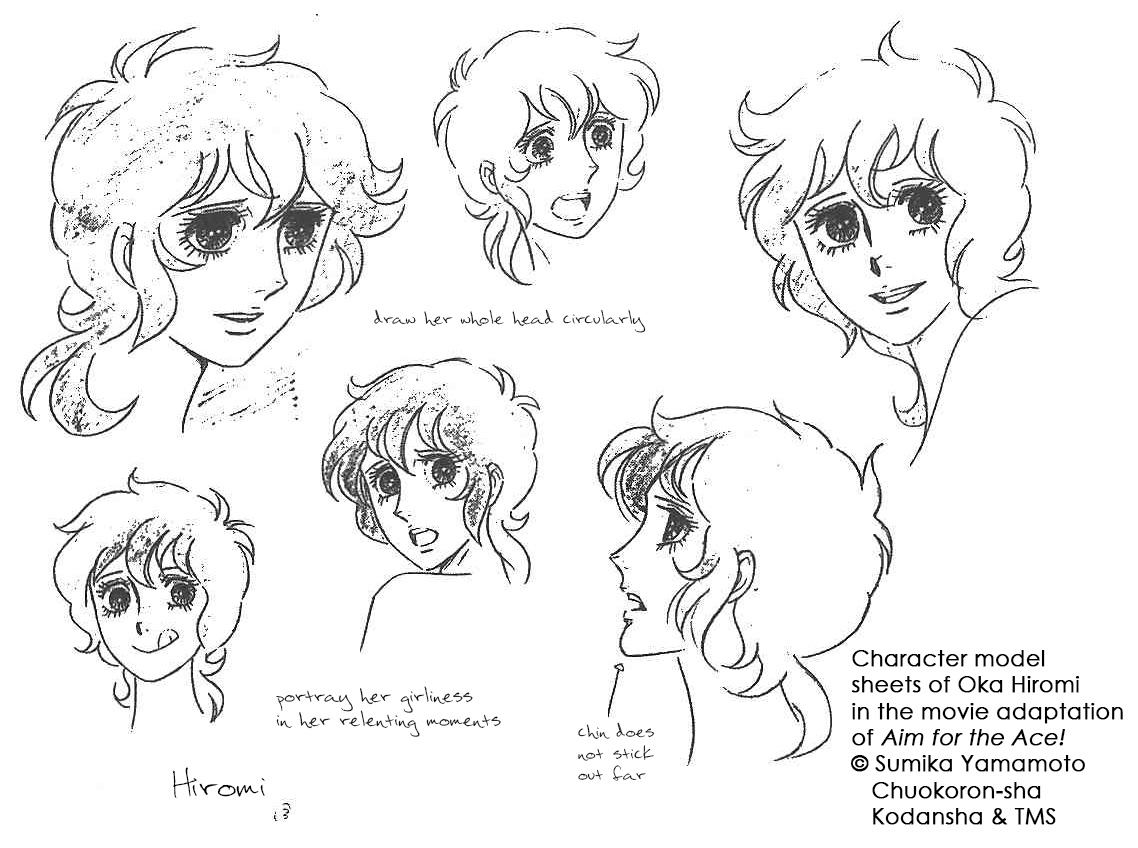 Sugino: No, it didn’t feel like assistant work. We just took turns in the animation director’s seat for different episodes.

Kinejun: Going back to Aim for the Ace!, was this a Tokyo Movie project?

Kinejun: Were there any projects at Madhouse that you, Dezaki, or anyone else proposed?

Sugino: I don’t know too much about the details of how the projects came to be. In the middle of Aim for the Ace! I returned to Madhouse. The production itself moved from Tokyo Movie to Madhouse.

Kinejun: Did you draw the entire main cast of Aim for the Ace!?

Sugino: Yes. I think I drew the character model sheets with a ballpoint pen or something like that.

Kinejun: Aim for the Ace! is originally a manga targeted towards girls. Did you have difficulty in coming up with the character designs for the anime?

Sugino: Oh definitely. Before you attempt designing characters for anime, it is crucial to understand the world they inhabit—so you should read the original work. But with the Aim for the Ace! manga, it was portrayed through a first-person perspective—a manga style narrative expressed in monologues. Initially I couldn’t get used to that way of thinking, so it was quite brutal for me but eventually I did get accustomed to it. Up until that point I hadn’t read a manga targeted towards girls besides those from artists like Tetsuya Chiba, Osamu Tezuka, Shotaro Ishinomori.[5]

Kinejun: As an anime adaptation of a girls’ manga, Aim for the Ace! certainly gives off the feeling of that kind of manga.

Sugino: I wonder about that. Tokyo Movie also adapted Attack No. 1. Initially with Aim for the Ace! I was told to adapt it just like they had done for Attack No. 1. But it became very clear that if Dezaki was helming the adaptation of Aim for the Ace! then it was not going to turn out like that. He tried different methods to bring out the taste and feeling of the original work. Later that extended to his work on Rose of Versailles.

Kinejun: The protagonist of Attack No. 1 is a girl, but the adaptation doesn’t feel like a girls’ manga. The art is also quite different from the original manga.

Sugino: Well, I’ve heard the same thing said about Aim for the Ace!

The interview continues in part 3 here.